Motion Sickness on
Amusement Park Rides and in Sport

It's no surprise that motion sickness affects many people on roller coasters and amusement park rides, but many swimmers in open water have also been caught out by sudden dizziness and feelings of nausea. 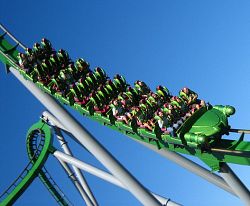 Similarly, both snorkelers and scuba divers can be affected. A newly recognized condition is ski sickness, which is now thought to affect around 10% of skiers.


How to avoid getting sick on Amusement Park Rides

From swings and merry-go-rounds to roller coasters and extreme drop rides, motion sickness prevents many of us from fully enjoying a day out at the amusement park. However, as most people visit amusement parks only occasionally, this is one time when medication such as the non-drowsy version of Dramamine may be useful. Ginger can also be helpful, and some people have good results with acupressure bands.

Common sense will tell you when to avoid repeated goes on the same ride. And do stop while you're ahead - give yourself time to recover between rides rather than continuing until you are on the verge of being actively sick. Swinging rides and in particular spinning rides are the worst for triggering motion sickness in most people. Roller coasters, with their varied undulating ride, are actually one of the better rides for motion sickness sufferers (so long as they don't loop the loop to often!).

Once you're on the ride there's not a lot you can do to prevent motion sickness, however try to keep your head straight and square to your shoulders. Allowing your head to tilt to the side will make you feel worse. If you start to feel sick close your eyes, or try closing just one eye (which, as with virtual reality simulators and games, may serve to lessen the messages received by the brain and therefore give a little relief.) Take deep breaths and concentrate on your breathing.

Sadly, our tolerance levels for rides tend to drop as we get older. For some people the moment of truth comes in their 40s, for others it's later. But there's a reason that you don't see many older people on these rides, and it's not that they have lost their sense of fun!

Swimming in open water quickly brings on motion sickness symptoms in many people. This seems to be due to a combination of the cold water (especially if it gets into your ears), the swell of the water, and not being able to see the ground (unlike in a pool where you can see the bottom). Symptoms range from mild dizziness and lightheadedness to a churning stomach and full-on nausea. A friend recommends swimming with your eyes closed if you get to this point, but you'd better have a good sense of direction if you try!

Using wax in your ears can help, or try silicone ear plugs for relief. If you are racing you may prefer not to use medications that can make you drowsy. Many swimmers use ginger, and there is a range of other natural remedies available.

Both snorkelers and divers can suffer from motion sickness. I'm not a diver, but I have it on good authority that if you actually get into the water despite feeling sick (most people will refuse to do this), then most people will feel better almost immediately. As motion sickness medication can disorientate you and affect your judgment it's important to be very cautious about using it. I have been told that Triptone (Dimenhydrinate) is widely used. The Motion Sickness Patch works for some people, but due to possible side effects it really must be tested in advance - on dry land - before you use it in a diving situation.

Motion sickness becomes more likely as you get tired, so keep eating and drinking during the day to keep your strength up.

Finally, if you are sick, look on the bright side - embarrassing though it is, it will attract lots of fish!

Ski sickness, or Häusler's Disease, is a form of motion sickness suffered by downhill skiers. It has been documented by Dr. Rudolf Häusler, a Swiss ear, nose and throat doctor. Sufferers are often competent skiers whose rapid and rhythmic turns can be as frequent as every two or three seconds. Other triggers are visual disorientation caused by the uniform whiteness of the snow and poor weather conditions (especially low cloud on so-called 'white days'), and possibly the rapid changes in atmospheric pressure as the skier descends from high to lower altitudes. Dr. Häusler estimates that around 10% of skiers may suffer motion sickness symptoms at some point.

The good news is that standard remedies and medications are generally effective in preventing the symptoms in most cases.

Do prescription patches (Transderm) work on amusement park attractions, such as roller coasters and simulators? They work great for me on cruises, and we are going on a three day trip to the amusement capital of the world (Orlando) and was wondering if it would help?

Lucy @ Motion-Sickness-Guru.com replies:
Tom, I haven't personally tried the patch for amusement park attractions, however I've heard from a number of people that it did indeed work for them on roller coasters, simulators etc. As you have previously used the patch with success I would say there's nothing stopping you giving it a try (although it you have any concerns then please do consult a qualified medical practitioner first!). Have a great trip!

Ellie on April 10, 2015:
Today I spent the whole day at Drayton Manor theme park on all of the big thrill rides. I went on this one called Apocalypse, and all it does is drops you from 300ft, but I hate the ride. I only went on it because my friends were. Now I'm really regretting it because I'm trying to get to sleep and every time I close my eyes, I feel like I'm either falling or being flung around in all directions and I feel sick. There's probably nothing I can do about it now, but is there anything I can do to prevent it from happening? I get this same effect when I go Kayaking too, it's horrible.

Daisy on March 25, 2016:
Ellie, the symptoms of 'movement' you get after violent movement on rides and on water... they are quite common, and there is a syndrome called 'mal de debarquement' which leaves you feeling as if the room is moving when it isn't. I suffer from the same illusion of movement after being on a ship/rough train journey/van journey for a few hours. The feeling does pass, but can be quite disconcerting. I even get the feelings of the room rolling or swaying even when anti seasickness meds [like the scopoderm patch] are used, but I don't feel sick, luckily.

Nick on June 4, 2016:
Went to an amusement park 4 days ago and had to leave work today because I still am feeling motion sick. What is going on this many days past the event?

KMax on June 8, 2016:
Nick -- while the feeling may still go away naturally, look up "mal de debarquement" and "mal de debarquement syndrome". I have had it for 8 months after going on a series of inner tube wave rides and fast waterslides. Read about Dr. Mingjia Dai's treatment at Mt. Sinai in New York. I saw him, watching the optokinetic stripes ultimately did not work for me, but I did feel that it changed the velocity of the swirling feeling. I just need to get the direction and frequency of the stripes right. Also, you may just have BPPV, a form of vertigo caused by tiny crystals coming loose in your inner ear. BPPV can be easily fixed by a chiropractor who knows what they're doing, tilting your head in a series of directions. It's called the Epley Maneuver.

Brooke on July 10, 2016:
I went on a few rides yesterday, and me and my cousin we're spinning very fast in one. I tried eating crackers and water in small amounts after, and I felt a little better. Now I'm having trouble sleeping and I still feel a little sick. Is there anything I can do to help this?

SemperFido on July 25, 2016:
If you feel dizzy or sick or have illusions after rides and need to sleep... When you shower fill your tub with water and try to float your whole body while laying back. It will stimulate your body in a way and may help your nausea dizziness and illusions... Hope this helps.

Shaolinkuncklehead on July 25, 2016:
I went on for a ride in the back of a monster truck yesterday. Not exactly a thrill ride. Two donuts and I was done. Vomiting. Couldn't drive home. All I want to do is lie down and sleep. Unreal. I couldn't ride go karts b/c of the quick turns. Same sickness.

Dman on March 29, 2017:
Hello, I am getting ready to go to Disney in two weeks, I recently have been having problems with dizzy and the possibility of vomiting on spinning rides. Is any suggestion you recommend?

James on April 6, 2017:
I have long considered myself a roller coaster enthusiast. However, in recent years, I have struggled with nausea and vertigo that lasted for an hour after each ride. Last weekend at Universal Orlando, I used simple, squishy earplugs and folks, it was a night and day difference. They were more effective for me on the roller coasters than the simulator rides, but they did work for me. They are cheap, easy to use and you can buy them at any pharmacy. They also drown out the blood curdling screams from the people behind you on the coasters.

Miles on October 13, 2017:
I am going in 2 months to Disney World and want to enjoy the rides, only thing is I get motion sickness on rides. What do you recommend for me to stop it?

Troy on November 29, 2017:
I went on a Show ride (Sizzler) with my daughter 4 days ago and felt pretty average when I got off. Problem is I still feel a bit average. Dizzy spells and slightly nauseous. Starting to worry me, hence my google search. At least I know now it's not a unique experience. Hope it stops soon.

Mamabear on July 23, 2018:
Sorry so many of you suffered past the ride, but I'm thankful for your comments and to know this has happened to others. We were at an amusement park all day today. While neither myself nor my 10-year-old son had a problem at the park, he just woke me up at midnight because he was sick and throwing up. In his daze (he was almost sleep walking) he said he felt amusement-park-y.? I think that's his term for belated motion sickness in his dreams. Keep passing on suggestions. I hope this passes quickly for him! (And, no, we did not binge on junk food all day, so I know it wasn't food related).