How and when to take Ginger for Motion Sickness

The star of the motion sickness natural remedies line up has to be ginger! It has been used as a treatment for motion sickness for centuries (it's said to have been first used by the ancient Chinese), and although it doesn't work for everyone, a lot of people find it very effective indeed.

Ginger (Zingiber officinale) is natural, widely available and cheap. What's more, it comes in numerous forms - from raw to capsules, from cookies to tea - so even if you're not a big fan of the taste, there's likely to be something you can take. And it works fast (some people find it has an almost instant effect!), even after you have started to feel nauseous.


Ginger and side effects
For most people, ginger is completely safe and side-effect free. However, it is contra indicative (can negatively interact) with certain medications, particularly blood thinners (e.g. Aspirin). Ginger should not be used by those taking blood thinners. If you are taking a course of medication, and/or if you are at all unsure if ginger is right for you, then consult your doctor.


How to take ginger

Ginger, of course, is widely available in its raw state (ginger root), but as well as fresh, it can also be used dried, powdered and as a juice or oil. You'll find it available as supplements, pills and capsules, tea, candied, in drinks (ginger ale, ginger beer) and in sweets and cookies (ginger snaps and nuts). It is even available as an essential oil (see below). 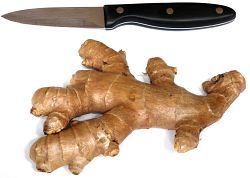 A piece of raw ginger root
The cheapest way to take ginger is to simply buy a small piece of fresh raw ginger root in the supermarket (fresh produce section). Peel it and suck or chew a small cube or slice. Probably better not to swallow it though, as ginger can give a lingering aftertaste that many find unpleasant.

If raw ginger is a bit much for you, visit your local pharmacy to get ginger in dehydrated form as pills, capsules or chewable tablets. I find the chewable tablets work best for me, probably as the chewing action itself has a preventative effect against nausea (see Basic "Dos and Don'ts" - 'Suck a hard candy / boiled sweet' section).

Found in supermarket spice sections, powdered ginger can also be effective, and half a teaspoon full can be taken in a glass of water (plain or fizzy) or apple juice. Mix in a little sugar if you still have problems with the taste.

Similarly, raw ginger root can be grated and boiled up to make a 'tea'. Strain off the grated pieces and drink the liquid either as it is, or with added sugar or honey. I find this better hot than cold, so take it along with you in a vacuum flask.

Another option is to suck on a piece of candied ginger (also known as crystallized ginger), available from good grocery and health food stores. Rather than chew the ginger, let it dissolve in your mouth. As with raw ginger, don't swallow too much of this, as it tends to 'repeat' on you. 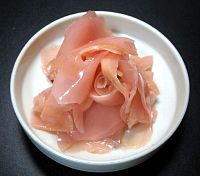 Pickled ginger (or gari, Japanese sushi ginger) is available from Asian groceries and some health food stores. It's a good option if you like the taste and can get hold of it.

Of course, the easiest way to take ginger is in cookie/biscuit form. Ginger snaps and ginger nuts are widely available. Before you buy, though, do make sure they contain real ginger (and not just an artificial flavoring). You could even try chocolate covered ginger, although the richness of the chocolate shell may well be counterproductive in preventing sickness.

Ginger ale and ginger beer are great in theory, as it's hydrating and carbonated too. But check the label carefully - many brands contain little or no actual ginger. Needless to say, artificial ginger flavoring won't do anything to prevent motion sickness. Commercial ginger beer is similar to ginger ale except that it has a significantly stronger ginger taste and is sometimes described as 'ginger ale with a kick'.


When to take ginger

Ginger seems to work best as a preventative to motion sickness if you start taking it before your trip - at least a couple of hours before departure. In preparation for longer trips it's better to start 24-48 hours in advance. Continue to take it at regular intervals during the trip, or as and when needed. If you're taking pills or capsules, studies have shown 500mg taken every few hours to be effective, but use the dosage instructions on the packet as your guide. To avoid 'land sickness' (see notes on Mal de Debarquement Syndrome, MdDS) following a long boat ride or cruise, it's a good idea to continue taking ginger for a couple of days after you disembark.

Thank you so much for sharing all your knowledge! I'm a pilot and this helps a lot of us! Students starting to fly are most likely to suffer from this. Thanks again for this site!

Linbay on March 23, 2015:
Thank you for the information. I have drunk a cup of ginger tea every morning, and ginger tablets before traveling, and it really helps me.

StudentPilot on August 8, 2015:
I am a student pilot learning in a Cessna 172 and my instructor recommended this for me. I am very eager to try and see how it works!

Taylor on January 1, 2016:
Nice, I've been using ginger for years. It works magic! Crystallized has been my favorite; you only need a couple small pieces spread through the hours, it's fantastic!

Mary on March 29, 2016:
I was just introduced to this website. I can't wait to try this, I have tried every motion pill available. Going on a trip in a week, and getting nauseous on a flight never fails.

Spice Valley Road on May 19, 2016:
A high school classmate and former Navy pilot suggested I read the information. I have a problem driving the 'high speed' indoor go carts. After 4 minutes, my vertigo takes over. I'll try the chewable or capsule version - depends on what my local drug stores carry - starting a day or two before my next attempt. Results to follow on Memorial Day Weekend.

Jamie on August 30, 2016:
When I fly, I usually get ginger ale for the comp drink. It's helped more than once!

Fara on October 15, 2016:
I am an air hostess, and despite consuming ginger and various other medications I am not able to overcome my giddiness and hence I had to resign. Is there something that can help me out of this?

Abdisamed on November 7, 2016:
I am student in Kenya and I have problems like vomiting while in the car or bus I hope Ginger will solve my problem insha allah.

AnotherStudentPilot on March 30, 2017:
This worked very well for me. I was afraid I would have to stop flight lessons because of air sickness. I wouldn't have believed it until I tried it, but it works great. I got some ginger capsules and they seem to work best if I take them anywhere from an hour or so before I fly.

Anne on December 23, 2017:
I use ginger gum for flights and cruises. I also recently used it when I had a stomach bug. For me, it definitely helps and works much better than prescribed Zofran. I buy it at Walgreens. I also use the sea bands for travel which also helps.

anon on June 7, 2019:
Thanks for this - I've taken it for years - Nature's Way or NOW - and always just guessed at how much to take. It's nice to know there's a recommendation.

on June 15, 2021:
I have used ginger capsules, 500mg, with great success. On two different occasions at sea I suffered no ill effects of motion sickness. Once on the Caribbean with 30 foot swells and another time on the Tasmanian Sea on a ferry to mainland Australia with very rough seas for about seven hours. My regimen was to take two 500mg capsules one hour before embarking and one capsule every two hours if needed. I hope this helps. For me there's nothing worse than having motion sickness! Good luck!

Sandra on September 18, 2021:
Great tips! First time I went sea kayaking I got sick to my stomach. It was horrible. Second time I chewed/sucked on raw ginger before and during the kayaking and I was fine!!

Jason on November 3, 2021:
Do you have any scientific data to support the claims above  specifically related to motion sickness from air travel which is different than the mechanism of action caused by land and sea travel? I have been unable to locate any well researched data using PUBMED or COCHRANE database. My search has essentially identified the placebo effect of ginger for other types of antiemesis related to chemotherapy and pregnancy but none addresses air sicknesses due to the known placebo effect. Thanks in advance.

Christopher on June 23, 2022:
I have used the prescribed drug scopalamine for many years, whenever I expect to go boating in rough seas. It works perfectly with no side affects. For some there will be side affects though, and it is a somewhat dangerous drug. It is also expensive.

Jessica on August 10, 2022:
I'm looking into starting the Ginger pills while cruising. I cruise a lot and my first cruise I got so sick and there wasn't even rough seas. I have narcolepsy, so taking thinks like Dramamine will not work for me, so my dr prescribed me with the Scopolamine patch, which worked great for me for several years and only had one side effect, after receiving cataract surgery, I went on another cruise using my patch, and I till this day still have a major side effect worse than the other one, but the original side effect went away. I'm to the point now where I'm thinking about stopping the cruising all together, but am willing to try the ginger pills if anyone thinks it would work for someone like me? I don't get car sick, or sick from a roller coaster, but I do when there is a repetitive motion (Ferris wheel, high fast drops, cruises, etc..) this is so strange to me.