Crossing the Baltic Sea from Helsinki to Tallinn

My wife and I were in Helsinki, Finland, in mid-winter and decided to do a day trip to Tallinn, capital of Estonia. Tallinn is across the Gulf of Finland from Helsinki and the journey across the Baltic Sea takes about three hours by ferry.

The ferry left early in the morning, and it was dark and bitterly cold when we arrived at the ferry port just after 6 am. We were a little worried about sea sickness on the trip, but not too much as the ferry was a large one and the trip was not very long. Also the weather in Helsinki was quite calm. So we went straight to the restaurant and tucked into the Scandinavian breakfast buffet - a feast including lots of marinated herrings, delicious! The ferry left while we were still eating and at first the journey was very calm - but little did we realize that we where still in a sheltered area between small islands off Helsinki... 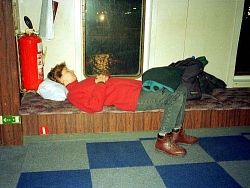 My poor wife on our Baltic sea crossing
The moment the ferry reached the open sea, our troubles began. The sea was very heavy, and we soon started to feel very sea sick. We were not the only ones feeling sick, in fact it seemed that most people on the ship were badly affected (except the staff who were not fazed at all, they obviously had to endure this regularly).

Then things got worse - waves started to hit the top windows at the front of the ship, and the ferry started to roll and pitch very strongly, so much so that we were beginning to worry that it might not really be 'safe'. Through the open door of the kitchen we could see the stacks of plates moving up and down a lot in their spring-loaded holders.

We asked one of the ship's officers who walked past whether it was dangerous, but he assured us that it was no problem and 'quite normal'. But shortly after that we heard a loud crashing noise from the kitchen, and a lot of crockery had gone to pieces. That made us think that this journey must be a little out of the ordinary - it would just be too expensive to have to replace all those plates after every crossing!

My wife found a bench and lay down. She was fairly OK after that as lying down gives her good relief from sea sickness. Unfortunately the same was not the case for me.

The herrings' revenge!
Finally I couldn't stand it any more and I had to give up all the nice breakfast I had. I was not the only one. Passengers all around us were ill. I felt very sorry for the staff who would have to clean up the mess.

As we approached Tallinn the sea calmed down and our sea sickness disappeared. We had a great day exploring Tallinn, with its lovely old town and historic buildings. However, all the time it was in the back of our minds that we would have to cross the rough sea again in the evening. As it turned out, the return journey was much better. This was because the sea had calmed down a bit, but also because we didn't eat anything this time, and we found a corner and lay down straight away. Altogether it is not an experience I want to repeat.

Kevin on December 22, 2016:
Hey Carl! Thanks so much for your honest review. We are planning to take an optional tour during Jan 2017 to Tallinn and are really worried about the waters. Your story definitely gave us some pointers! Wonder whether it's worth the rough seas. Anyway, my wife and I truly appreciate the heads up!!